Orthodoxy in the law

From being the space leader Russia starts rolling back to medieval society. The mindset of rapidly orthodoxized country leaders successfully combines profane rites with church ranks and economics modernization. The orthodox church persistently and aggressively absorbs the ideological vacuum penetrating into all areas of civil society like school, army, kinder garden, power which are proclaimed by Constitution to be secular.

The film as a 90 minutes' exclusive documentary survey done over years by an ex-munch of Russian Orthodox Church with 13 years experience is dedicated to the 20 years’ anniversary of Constitution of Russia. It objectively portrays the current religious happenings, gives voice to various and even contradictory positions articulated by civil experts, scientists, journalists, orthodox church representatives - with an attempt to specify the challenges and threats of rising society clericalization.

The film production was fully sponsored by citizens of Russia

Review of the film: 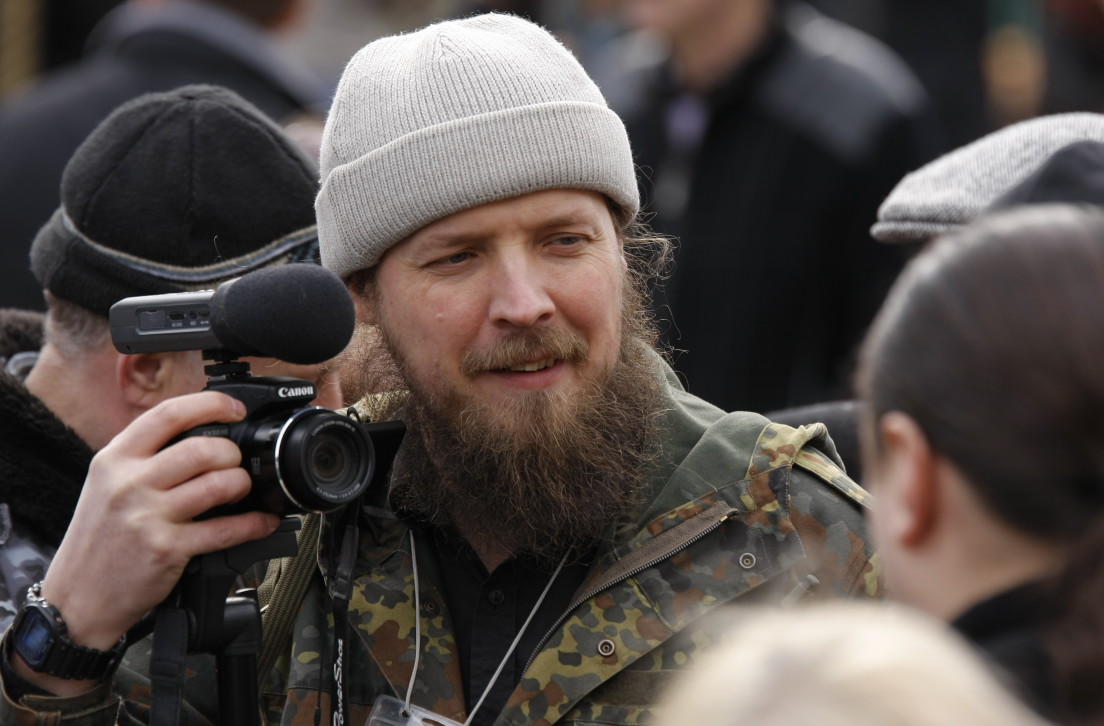 You can often see them at LGBT rallies giving Nazi salutes, or throwing eggs at gays kissing in the street. They are a small but growing radical faction of Russia’s Orthodox Church—and Mikhail Baranov says they pose a great danger to his country.

Baranov would know. He was an Orthodox monk for 13 years before he became disillusioned with what he calls the corruption and hypocrisy inside the church. Now he’s a filmmaker, and his first documentary, Orthodoxy in Law, is about the church’s fascist fringe. Too provocative for Russian theaters, the film was released online earlier this month. It already has gathered more than 90,00 views, and Baranov says they are working on an English translation for a Western audience. I spoke with Baranov about his new movie, why he left the church and the time he spent in a mental hospital for “asking too many questions.”

“I was driven to a mental hospital, where I was admitted without my consent and kept for more than three months.”
Mikhail Baranov

Who are these Orthodox radicals you decided to profile?

They’re a group of Orthodox Christians who have declared themselves exceptional and believe that their Orthodox God has put the Russian people in charge of everything. Their goal is to promote this idea. This is exactly what you see the characters in the film do.

How big is this movement you are talking about?

In the film, you see shots of them protesting, and it’s about 200 people. At the same time, you see other Orthodox Christians walking by and ignoring them. That’s exactly what is dangerous. The church tolerates and at the same time takes advantage of it. It uses these people to do its dirty work. One character in the film calls everyone who is not a member of the Orthodox Church an enemy and says they would be better off lying on Red Square with a bullet in their head. He’s part of an Orthodox group called the Holy Russia, which emerged in 2012 in response to Pussy Riot’s punk performance at the Christ the Savior Cathedral.

All the characters you portray in the film are essentially social deviants and are hardly representative of all religious Russians. Don’t you think it’s somewhat one-sided?

The film is intended to show the extremists within the church. The true religious people that would defend the so-called enemies of the church are virtually nonexistent. Pussy Riot’s trial is testimony to that. I used to spend time outside the courtroom with my camera hoping to see Orthodox Russians who would come to defend [the members of the group]. But they never came. They were too scared of the consequences.

Did you have any trouble getting this film into theaters?

Three movie theaters have rejected our film. A few others accepted a payment from us and then called us and said their projector broke. Then another theater in Moscow told us that the FSB [formerly known as the KGB] had contacted them and prohibited them from showing the film.

Why did you leave the church?

I started looking for the truth and asking questions. When you are inside the church system, you start compromising [your values]. The higher you rise, the more you have to do it. It’s simple things. We were once building a church, and a fellow monk had to move construction supplies. The truck he was given had bad brakes, and he told a senior monk about this, who instead of doing something about it, blessed him and said he was safe to go. The brakes faltered and caused a road accident involving four cars. Luckily, no one was hurt. But when the monk had to face an internal investigation, that same monk who had blessed him said to him in front of the others, “I told you to take care of the brakes.”

How did you end up being treated in a mental hospital?

There were many situations like the one I just described, and they kept piling up in my head. When I tried to talk about these problems, I was told to keep quiet and follow orders. When I tried to raise the issue at the diocesan level, I was driven to a mental hospital, where I was admitted without my consent and kept for more than three months. After I was released, spent several more years inside the church before finally deciding to leave.

What was your diagnosis?

According to the Russian law, they can withhold this information from the patient and his or her relatives. So I still don’t know what I was diagnosed with.

Have you lost your faith entirely?

My current knowledge and experience tell me that an Orthodox God does not exist in the way that people write and talk about him. If God exists, it is not in the way that we portray him in the Bible.